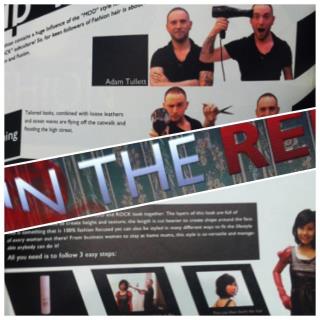 I’ve told you all before about how my oldest son upped sticks with his girlfriend and set sail for China. Not that he really took to the high seas, of course, he actually made the thirteen hour flight, but you get my drift…

Anyways, being the cool dude that he is, it came as no surpise to hear he was soon creating a bit of a buzz in the Oriental fashion world – I mean he is, after all, a creative chip off the old block (I like to think) and as a top notch hairdresser, very much knows his stuff.  Which is just the kind of chap the Editorial team were looking for when they recruited him to do a monthly feature for their lifestyle magazine In The Red.  A Guangzhou based periodical, covering art, music and fashion – I know, sounds good doesn’t it?

Now obviously, as a mother of two I’m very proud of both my sons’ achievements.  But the reason I’m telling you about Adam today, in particular, is because it’s thanks to him that Going Underground has now hit the streets of China, alongside him.

Oh yes, upon hearing about Going Underground it would seem the editorial team at In The Red thought I, too, was cool enough to grace the insides of their magazine.  And as such, gave me a full half page mention!

Of course, that’s ignoring the fact that they did, indeed, get my first name wrong, but I’m prepared to let that one slide, if you are?

So, having featured alongside Adam, all that’s left is to ask whether or not this means I’m now as cool as he is…?

I think both my children would probably say not, but I suppose that’s sons for you.